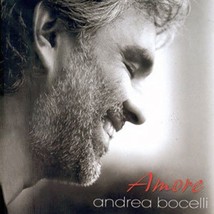 AMORE by Andrea Bocelli added to cart. 12 available in stock 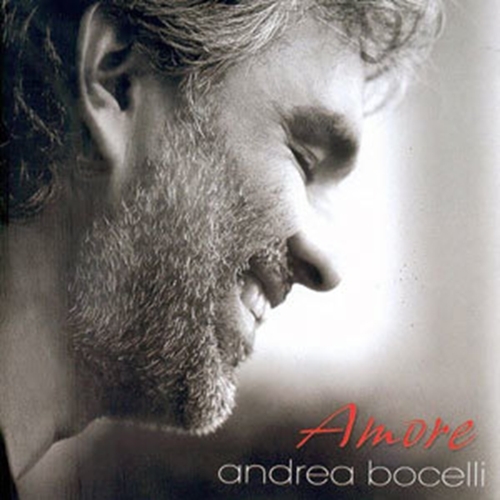 Between his albums of romantic Italian pop and his recordings of opera, Andrea Bocelli has attracted music fans of many stripes, but with the love songs on Amore, he might just acquire a whole new following. The album makes it clearer than ever that he's the true heir to some of the 20th century's most popular easy-listening vocalists, tackling songs made famous by the likes of Perry Como, Bing Crosby, and even Elvis Presley. Sometimes a classic song turns up with an unfamiliar title: "Somos Novios" was Como's hit "It's Impossible," and "Cuando Me Enamoro" scored big as "A Man Without Love" for Engelbert Humperdinck. Other sophisticated tunes, like "Besame Mucho" and "Autumn Leaves," have been around for so many years that they've acquired countless interpreters, but Bocelli's intimate and passionate delivery always satisfies on its own terms, whether the romantic language of choice is Spanish, French, Italian, or English. And on top of all the standards, "Because We Believe" is featured here as the 2006 Winter Olympics theme song. Producer David Foster -- who virtually owns this sort of music these days, masterminding the albums of Josh Groban, Michael Bublé, and many more -- crafts a wonderful variety of sounds to accompany Bocelli's voice, especially on the Latin-flavored numbers, while guest artists like Kenny G, Christina Aguilera (a surprisingly strong match for the tenor's crooning), and especially Stevie Wonder (on "Canzoni Stonate") put several tracks over the top. But Bocelli is always the centerpiece; his fans wouldn't have it any other way, and they're not going to be disappointed by Amore, a Valentine's Day gift that's sure to last year-round.