HEALED BY GRACE added to cart. 12 available in stock 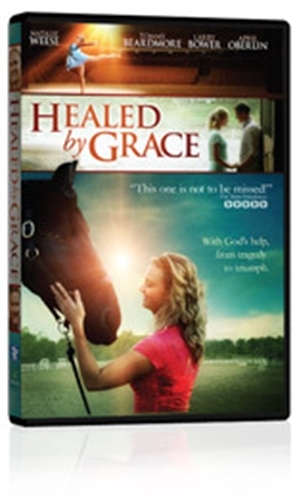 until God's grace appears from a most unexpected place. Healed by Grace is a charming tale of a faith, friendship, and love. It's at the darkest of times where these powerful elements of life all come to together.

Sex: Kissing between a young couple.
Language: Man says another character is a "tool"; a girl is encouraged to "kick butt" at a competition.
Violence: A car crash that is mainly seen with flashing lights and the sound of the crash;
a young man says he keeps busy with work when his parents fight.
Drugs: None
Nudity: Girls in shorts to perform a dance; mild cleavage.
Other: A man at a stable says he does not want to take care of a cripple but we learn he has a softer side too
a girl is referred to as a "Bible thumper"
a girl spills water on the floor so a dancer will slip during her routine
a girl is heartbroken following the loss of some of her skills.