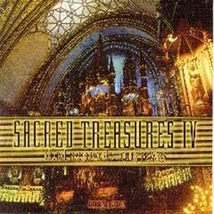 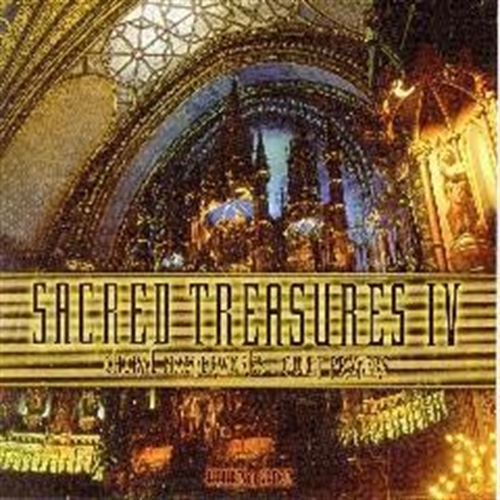 SACRED TREASURES IV is a richly textured compilation of some of the most tenderly beautiful pieces from the vast repository of Western sacred choral music, all but one piece dating from the early 20th century to the present. As the title suggests, these choral masterworks are truly quiet prayers.

In choosing the music, much emphasis was placed upon finding the most exquisite rendition of each piece, after comparing numerous performances by different choirs. As a result, every track is sublime! Another signature feature of Sacred Treasures IV--as in the entire Sacred Treasures series (all of which is the handiwork of producer Ellen Holmes)--is the intentional sequencing of the pieces. Rather than being simply a random collection of beautiful music, Sacred Treasures IV is designed to be an inward journey or tone poem.

Among the most notable pieces are three jewels each from beloved contemporary composers Morten Lauridsen and Arvo Part. The Lauridsen offerings are all stand-outs: the radiant "O NATA LUX", the heavenly "O MAGNUM MYSTERIUM", and the poignant "CONTRE QUI, ROSE" which is based upon a poem by Rilke about love.

Opening the album is Arvo Part's powerful invocation to wisdom "O WEISHEIT", which is infused with expansive natural resonance from the ancient stone church where the piece was recorded. The two concluding instrumental pieces are also by Arvo Part: "SPIEGEL IM SPIEGEL"--a deep meditation for violin and piano--and"PARI INTERVALLO"--a masterpiece for pipe organ in its quietest mood. From 20th century France, there are two exquisite classics by Gabriel Faure'--"IN PARADISUM" from his Requiem and "BENEDICTUS" from the much less famous Messe Basse--and Maurice Durufle's ethereal "IN PARADISUM" from his Requiem. In addition, there are two angelic pieces from the RUSSIAN ORTHODOX tradition, and a heart-melting, rarely performed gem from the Renaissance--Victoria's "JESU DULCIS MEMORIA"--which sounds as if it could have been written yesterday. This is truly a sanctuary for the soul, a haven for the listener to return to over and over again...