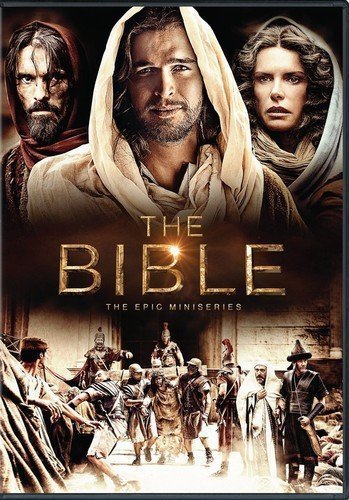 From Executive Producers Roma Downey and Mark Burnett come to The Bible — an epic 10 - episode miniseries retelling stories from the Scriptures for a whole new generation. Breathtaking in scope and scale, The Bible features powerful performances, exotic locales and dazzling visual effects that breathe spectacular life into the dramatic tales of faith and courage from Genesis through Revelation. This historic television event is sure to entertain and inspire the whole family.
Note: The Packaging of the title comes in such a way that a single case is designed to hold all the 4 discs for the title.
This 10-part miniseries meets the overwhelming challenge of bringing the story of the Bible to film in a way that embraces modern technology and makes the stories seem relevant and fresh to today's audiences. The Bible was truly a project of passion for executive producers Mark Burnett and Roma Downey. By focusing on hope and love as the string of continuity throughout the Bible from Genesis to Revelation, Burnett, Roma, and the writers and filmmakers have created a powerful series about a historical text that's at once action film, adventure, and even love story. The many stories included in this presentation include those of Adam and Eve, Noah and the ark, the birth of Abraham's son Isaac, Moses's parting of the Red Sea, David and Goliath, Samson and Delilah, Mary's conception of Jesus and his birth, the crucifixion of Jesus, and the spread of Jesus's word through his disciples. Each of the 10 episodes is powerfully rendered--the subject matter is by nature moving, and the costuming, special effects, settings, and filming choices are fitting and realistic.