The Life and Glories of St. Joseph by Edward Healy Thompson, M.A.

The Life and Glories of St. Joseph by Edward Healy Thompson, M.A. added to cart. 12 available in stock 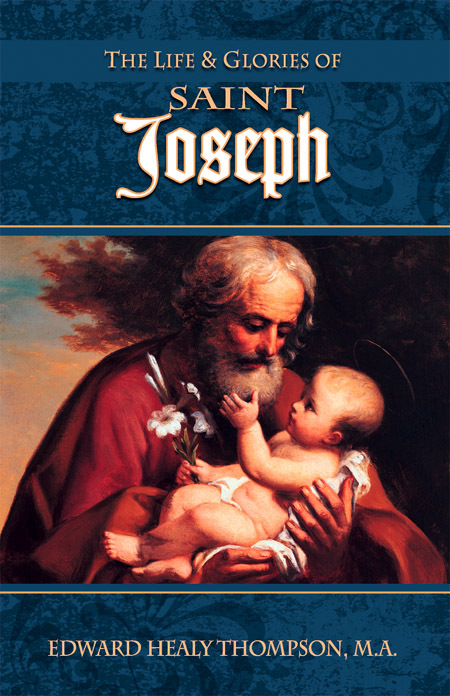 No words of St. Joseph are recorded In Scripture. In fact. little mention is made of him there. Yet. despite these seeming limitations. the Church nonetheless possesses an indescribably rich knowledge of St. Joseph and of his cultus. This book will astound most readers both with its scope and with its profundity. Based mainly on Scripture. but supported also by Tradition and the depositions of saints. it is a carefully reasoned analysis of the entirety of that great saint's role in the history of Salvation and the life of the Church. Includes details about his spiritual life and noble lineage; how he was prefigured in the Old Testament; his relationship to Mary and Jesus; why he has been named by Pope Pius IX "The Patron of the Universal Church;" and so forth. Many beautiful insights.

About the Author:
Edward Healy Thompson, M.A., was born at Rutland, England and converted to Catholicism in 1846 after practicing the Anglican faith. He received his education from Emmanuel College in Cambridge as well as from Oakham School. He devoted a great portion of his life to religious literature and authored such works as The Life and Glories of Saint Joseph, Remarks on Certain Anglican Theories of Unity, and A Few Earnest Thoughts on the Duty of Communion with the Catholic Church. Edward Thompson was the brother of poet Francis Thompson and the husband of Harriet Calvert, who also became a convert. He died at Gloucestershire on May 21, 1891.

Excerpts from this Book:

"Certainly we need no greater proof of the eminent sanctity of Joseph than is implied in the choice made of him by God to be the husband of Mary. We have only to look at her to know what he must have been."
— Edward Healy Thompson, p.109

"It is the common opinion of Doctors of the Church that, when the Blessed Trinity gave our saint as the spouse to Mary, no other man could have been found so like to her. ... St. Bernadine of Siena is of the opinion that there never were two spouses so like to each other as were Mary and Joseph. ... Joseph was so exceedingly like to Mary that he had none like to him among men. Inferior to the Blessed Virgin alone, he was superior to all else besides. In that superiority, therefore, they were partners. What a singular glory was this, to be so like to the Blessed Virgin as to possess in a great measure common privileges with her, and to have a love for God of the same character as her own! And, in effect, our Lady ... places no difference between the vehement sorrow and anxiety she experienced at the loss of her Son, and the sorrow, anxiety, and solicitude of her husband: ‘Behold, Thy father and I have sought Thee sorrowing’. She thus gives us the liberty to compare the love which they both had for Jesus, and to hold as a consequence that Joseph was so similar to her that there was no one else who could enter into comparison with him. Certainly, we need no greater proof of the eminent sanctity of Joseph than is implied in the choice made of him by God to be the husband of Mary. We have only to look at her to know what he must have been."
— Edward Healy Thompson, p.109

"[Joseph] loved her so exceedingly, with a love like what the heavenly spirits feel for each other, and would have readily given his heart’s blood for her: and as yet he knew not her incomparable dignity! Yes, he loved her exceedingly, and we may hold for certain that Joseph, as he was the first, so was he the most devoted servant of Mary—the most loving, the most faithful, the most assiduous, the most constant. … no less was the love and reverence which the Virgin had for him. She rejoiced to serve him as her lord, respect him as her tutor and guardian, and tenderly love him as her spouse, treating him with all the honor with which Scripture records that Sara treated Abraham, telling us that she called him ‘lord’, implying thereby much more than the mere words express."
— Edward Healy Thompson, p. 149

"If favored souls are sometimes sensibly conscious of the presence of the Blessed Sacrament in our churches, how much more must holy Joseph, whose spiritual senses were so delicate and refined, have felt his heart burn within him with divine charity, from the nearness of Him who now dwelt in Mary as His living tabernacle!"
— Edward Healy Thompson, p. 168

"Joseph, meanwhile, in the midst of his labors and his poverty esteemed himself superlatively rich, because in Mary he possessed the rarest and most precious treasure on earth. Her presence was paradise to him."
— Edward Healy Thompson, p. 182

"Joseph’s virtue was sublime and exceptional; therefore it was subjected to a great and singular trial. But, as he heroically surmounted this trial, so God was pleased, not only to console him but to exalt him to the dignity of extraordinary glory. ... Jesus, the Son of God ... willed to recognize this virgin spouse as His father in affection, adoption, government, and education, and to be constantly obedient and subject to him. The Holy Ghost, who had operated the incarnation of the Son of God in the womb of Mary, willed that to Joseph this His spouse should be entirely confided. He was to be the zealous guardian of her virginity, her guide, her aid, her support, and her inseparable companion through all the vicissitudes of life. And where, apart from the Divine Maternity, can so great a dignity be found upon the earth as that which was conferred on Joseph by the Three Divine Persons of the Most Holy Trinity?"
— Edward Healy Thompson, p. 197

"If it was, as we have said, a high honor to Joseph to be chosen as the spouse of Mary and accepted by her, what must we say of the dignity conferred on him in being chosen by the Son of God Himself to be His father?"
— Edward Healy Thompson, p. 201

"In that blessed [Christmas] night also Joseph became the patron, the vicar, and the patriarch of the whole Catholic Church. It is certain, St. Athanasius tells us, that the stable where Jesus was born is ‘a figure of the Church, whose altar is the

, whose vicar is Joseph, whose ministers are the shepherds, whose priests are the angels, whose great High-Priest is Jesus Christ, and whose throne is the Blessed Virgin.'"

"Heaven is the birth-place and home of love. Its blessed inhabitants love much, love forever, and love only what is worthy of love. Joseph, however, was blessed by anticipation, for he passed all his days in the exercise of divine love, and lived a life of love upon the earth. The Evangelists do not record a single word of this great saint; he observed, indeed, a marvelous silence. Not, however, an ungracious silence. The silence of ordinary men, as well as their irrepressible flow of words, is often merely selfish. But Joseph’s silence and his speech were alike prompted and regulated by the law of charity ... His words, indeed, were never superfluous, for they had their source in love, but they were also ruled by his will, not forced from him as the expression of his feelings."
— Edward Healy Thompson, p. 362

"Natural love is sufficient for earthly parents, but the love which our saint bore to Jesus, as His appointed father, was not merely human love, it was also a supereminently divine love; for, in loving his Son he was exercising the most perfect love of God; since He whom he called his Son was at the same time his God. As in creatures, all are finite, so all are capable of increase. What, then, may we imagine, must have been the growth of this ardent love in the heart of our saint during the long period which he spent with Jesus! Those things which tend naturally to add to human love, in him ministered fresh fuel to the divine flame within him. The constant association with the Son of God made Man and given to him as his own Son, the serving Him and being served by Him for thirty years, and, we must add, their marvelous resemblance created a bond between them which was unequaled of its kind."
— Edward Healy Thompson, p. 363

"God never caused the virtues and singular merit of Joseph to shine with greater splendor than when He said to him by the mouth of the angel, ‘Take the Child and His mother’ (Matt. 2:13, 20); for in them He committed to him His most precious treasures, giving him thus the preference over all the blessed spirits of Heaven; and Joseph received these two sacred persons into his care, to be their protector, their guardian, and defender." If then, Heaven made Joseph the protector of Jesus and Mary, we may rest assured that he was at the same time made the protector and patron of all men."