The Life of the Blessed Virgin Mary From the Visions of Ven. Anne Catherine Emme

The Life of the Blessed Virgin Mary From the Visions of Ven. Anne Catherine Emme added to cart. 12 available in stock 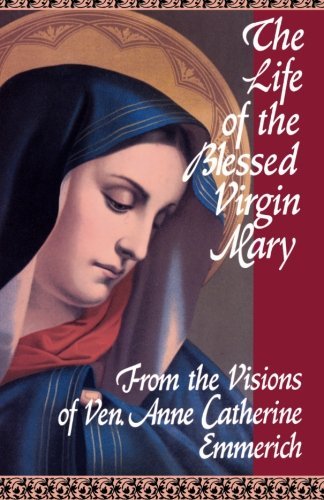 The Life of the Blessed Virgin Mary
From the Visions of Ven. Anne Catherine Emmerich

Incredibly revealing and edifying background of Our Lady, her parents, and ancestors, St. Joseph, plus other people who figured into the coming of Christ. Many facts described the Nativity and early life of Our Lord, as well as the final days of the Blessed Mother--all from the visions of this great mystic.

Anne Catherine Emmerich was born to poor parents in Westphalia, Germany in 1774. When she was twenty-eight years old she became an Augustinian nun at Dulmen, and apparently began to experience ecstasies as a result of spiritual favors. She received the Stigmata in 1813, confined to her bed, and reportedly convinced a vicar-general, Overberg, and three physicians of her sanctity. She later reported that she had seen visions of Christ and the souls in purgatory as a child, as well as a circular core with three sections representing the Trinity. She is the author of The Dolorous Passion of Our Lord Jesus Christ, The Life of the Blessed Virgin Mary, Life of Jesus Christ and Biblical Revelations, and The Bitter Passion and the Life of Mary.

Excerpts from this Book:
"Mary remained with the donkey at the very entrance of the street while Joseph sought a lodging in the nearest houses—in vain, for Bethlehem was full of strangers, all running from place to place. Joseph returned to Mary, saying that as no shelter was to be found there, they would go on farther into the town. He led the donkey on by the bridle, and the Blessed Virgin walked beside him. When they came to the beginning of another street, Mary again stopped by the donkey, and Joseph again went from house to house in vain seeking a lodging, and again came sadly back. This happened several times, and the Blessed Virgin often had long to wait. Everywhere the houses were filled with people, everywhere he has turned

away ... Joseph led the Blessed Virgin to [a] tree and made her a comfortable seat against its trunk with their

so that she might rest while he sought shelter in the houses near. ... At

Mary stood upright, leaning against the tree. Her ample white

dress had no girdle and hung around her in folds: her head was covered with a white veil. Many people passed by and looked at her, not knowing that the Redeemer was so near to them. She was so patient, so humble, so full of hopeful expectation. Ah, she had to wait a long, long time; she sat down at last on the rug, crossing her feet under her. She sat with her head bent and her hands crossed below her breast. Joseph came back to her in great distress; he had found no shelter. His friends, of whom he had spoken to the Blessed Virgin, would hardly recognize him. He was in tears and Mary comforted him."
— Bl. Anne Catherine Emmerich, p.185