The Mass: A Study of the Roman Liturgy 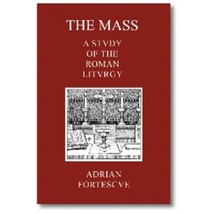 The Mass: A Study of the Roman Liturgy added to cart. 6 available in stock

The Mass: A Study of the Roman Liturgy

The English classic on the historical development of the ancient Roman Mass is sometimes referred to as the "Tridentine Latin Mass". This is a high-quality hardback reprint of the 1930 printing, which though a newer impression from the original 1912 edition, in substance differs from the first only by the preface to the second edition. As one can read in the Editor's Preface, this title was initially part of The Westminster Library collection, a series of "handbooks" that were compiled to assist priests and students in better understanding the various elements of their Catholic Faith, primarily in matters of theology. Fr. Adrian Fortescue (1874 - 1923), was an English Roman Catholic priest and scholar, a noted linguist and lecturer, a painter and calligrapher, an organist and composer of hymns, and an archaeologist and liturgical expert in both the Western and Eastern Rites. Recipient of the rarely bestowed ecclesiastical triple doctorate, friends and parishioners alike called him "the Doctor", in tribute to his genius and multitude of talents.

Title: The Mass: a Study of the Roman Liturgy