The School of Jesus Crucified: The Lessons of Calvary in Daily Catholic Life

The School of Jesus Crucified: The Lessons of Calvary in Daily Catholic Life added to cart. 12 available in stock 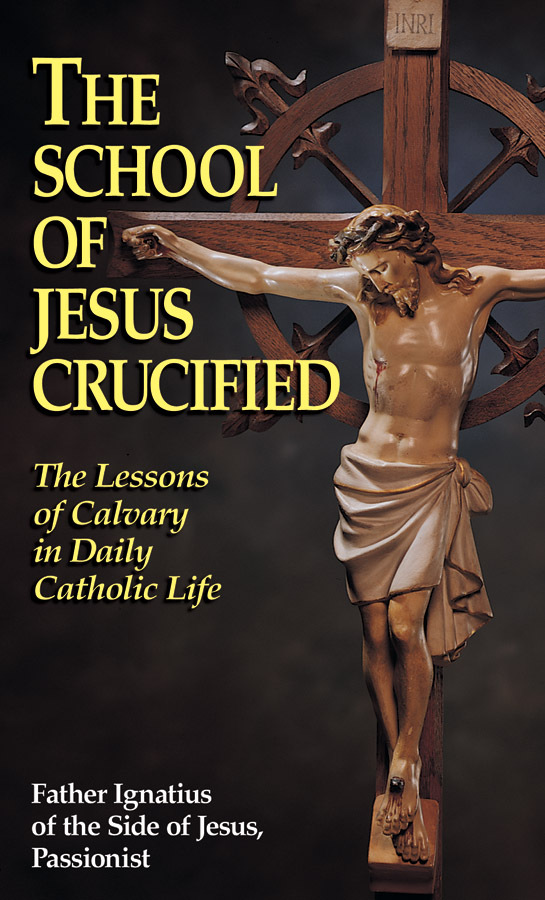 The School of Jesus Crucified:
The Lessons of Calvary in Daily Catholic Life
by Rev. Fr. Ignatius of the Side of Jesus, Passionist

About the Author:
Father Ignatius (Carsidoni) of the Side of Jesus, Passionist was born in 1801. He first taught theology at Rome and was one of the hidden influences on English Catholicism's rebirth. He became inflamed with the zeal to convert the country from his fellow Passionist, Blessed Dominic Barberi. The latter had received this passion in turn from St. Paul of the Cross, who founded their order. Father Ignatius' The School of Jesus Crucified was written to instruct the faithful on how to base the whole of one's spiritual life on Christ's Passion and Death. The author died in 1844.

Excerpts from this Book:

"Our Blessed Lord, bound like a thief, is conducted through the public streets of Jerusalem accompanied by a large body of soldiers who indulge their rage and hatred by ill-treating Him in every possible

way and surrounded by a multitude of people who overwhelm Him with insults and maledictions and rejoice over His misfortunes. Jesus advances, His feet bare, and His strength utterly exhausted by all His mental and bodily sufferings, offering up the ignominy and tortures He is now enduring, to His Eternal Father, for the salvation of my soul. The soldiers render His position still more painful, by inviting people to approach and see their renowned prisoner, while Jesus proceeds on His way in the midst of them, with a humble demeanor and with downcast eyes, to teach us what value we should set on the esteem and honor of the world, and the applause of men. But a few days previously Jesus had passed through these same streets, applauded and honored by the crowd as the Messiah, and now, abandoned even by His disciples, He is followed only by perfidious enemies who seek His death, and unite in deriding and insulting Him as a malefactor, and the last of men. Such is the duration of the honors and praises of the world! Learn hence to seek the good pleasure of God alone, to labor for the acquisition of a right to the immortal honors of Paradise, and to practice patience under humiliation, from the example of Jesus."
?

“It almost always happens that interior sentiments of pride precede the commission of grievous sins. Peter was not aware of his weakness. He preferred himself before others; he trusted in himself as though he were incapable of sinning, boasting that no temptation would separate him from Jesus. He would not even believe the assurance of his Divine Master, that he would deny him thrice. Deceived by this vain confidence in his strength, he neglects to pray, and to have recourse to God; and God, in His justice, permits him to fall, in

of his pride. There is nothing more dangerous than to confide in our

and trust in feelings of fervor. We are full of

and capable of committing

"Joseph, meanwhile, amid his labors and his poverty esteemed himself superlatively rich, because in Mary he possessed the rarest and most precious treasure on earth. Her presence was paradise to him."
— Edward Healy Thompson, p. 182

"If it was, as we have said, a high honor to Joseph to be chosen as the spouse of Mary and accepted by her, what must we say of the dignity conferred on him in being chosen by the Son of God Himself to be His father?"
— Edward Healy Thompson, p. 201

"Jesus Christ did not think the sovereign beatitude and glory of Heaven too dearly purchased at the price of unspeakable tortures, and by suffering His sacred flesh to be mangled by nails, thorns, and scourges. Great indeed must be the value of that which cost the Son of God so dear! And yet we esteem it so little, as to be even ready to renounce our claim to it, as so many of us do, for the sake of some wretched pleasure or despicable interest! Ye blind and deluded children of men, contemplate the Wounds of your Crucified God, and see in what manner the gates of the kingdom of glory have been opened to you! See what it has cost Him to place you in possession of it, and understand, if possible, how infinite a benefit was bestowed upon you by the Son of God when He purchased for you Heaven, which you had lost by sin! ... Enter in spirit into these sacred Wounds, and you will comprehend the value and sublimity of that eternal felicity which they have acquired for you, and you will learn to detach your heart from the earth and creatures, to place all your affections and desires upon Heaven."

"The Blessed Virgin endured a long and cruel martyrdom in her heart for our sakes, and love of us. Frequently, and with feelings of tender love, contemplate her standing at the foot of the Cross, and join her in bewailing and weeping over sin, which, by causing the death of Jesus, rent in twain the heart of Mary. Pledge your heart to this Mother of sorrows, by some habitual act of devotion and mortification, in remembrance and honor of her bitter sufferings. Also, endure something for the love of her, imitating her patience, resignation, and silence."
— Fr. Ignatius of the Side of Jesus, p. 259

"Many Christians regard Confession in the light of an unimportant act of piety, if not mere ceremony . . . many go even frequently to Confession, but so few amend, and consequently derive little or no benefit from the Sacrament. ... Be, then, most thoroughly convinced of the immense importance of this Sacrament, and be filled with an earnest desire of approaching it worthily, bestowing the utmost care and attention upon your preparation for this great duty, if you desire to obtain eternal salvation. Confession is one of the seven Sacraments instituted by Christ; it is called the Sacrament of Penance, and by its means alone can he who has committed mortal sin after Baptism hope to save his soul; therefore it is called by the holy Council of Trent: the second plank after shipwreck. In this Sacrament Jesus Christ has deposited His Precious Blood, that it may be to our souls as a salutary bath wherein they may be cleansed from all the stains of sin, their wounds closed, their maladies cured, their weakness strengthened, and grace unto salvation imported to them. This Divine Blood is dispensed to us by the priest in the holy absolution, and is abundantly poured forth upon all souls approaching the tribunal of confession with proper dispositions."

"For want of contrition, innumerable Confessions are either sacrilegious or invalid; the penitent so often breaks his promises to

and falls again so easily into the same faults, and many souls are eternally lost. Contrition is that true and lively sorrow which the soul has for all the sins it has committed, with a firm determination never to commit them

. . . Many Christians spend a long time in examining their consciences, and in making long and often unnecessary narrations to the confessor, and then bestow little or no time upon considering the malice of their sins, and upon bewailing and detesting them. Christians such as these, says St. Gregory, act like a wounded man who shows his wounds to the doctor with the utmost anxiety and care, and

will not make use of the remedies prescribed. It is not so much thinking, nor so much speaking of your sins that will procure their pardon, but heartfelt sorrow and detestation of them."

"Heaven is the birth-place and home of love. Its blessed inhabitants love much, love forever, and love only what is worthy of love. Joseph, however, was blessed by anticipation, for he passed all his days in the exercise of divine love, and lived a life of love upon the earth. The Evangelists do not record a single word of this great saint; he observed, indeed, a marvelous silence. Not, however, an ungracious silence. The silence of ordinary men, as well as their irrepressible flow of words, is often merely selfish. But Joseph’s silence and his speech were alike prompted and regulated by the law of charity ... His words, indeed, were never superfluous, for they had their source in love, but they were also ruled by his will, not forced from him as the expression of his feelings."
— Edward Healy Thompson, p. 362

"If then, Heaven made Joseph the protector of Jesus and Mary, we may rest assured that he was at the same time made the protector and patron of all men."
— Edward Healy Thompson, p. 401

"God never caused the virtues and singular merit of Joseph to shine with greater splendor than when He said to him by the mouth of the angel, ‘Take the Child and His mother’ (Matt. 2:13, 20); for in them He committed to him His most precious treasures, giving him thus the preference over all the blessed spirits of Heaven; and Joseph received these two sacred persons into his care, to be their protector, their guardian, and defender."

“Have you ever found yourself wanting

to somehow draw closer to

Jesus, and to think about
why did He choose to suffer out of tender love for you?

This devotional book offers a way to be irresistibly drawn
to the memory of His passion.

Thoughtful, profound, and deeply moving,
its reflections and prayers are divided into thirty-one
days, which makes it easy to insert into a
simple daily prayer routine.

It will help to soften your heart,
and remind you that Christ has
a heart that beats for you!