WE ARE LOVE - SPECIAL EDITION by IL VOLO

WE ARE LOVE - SPECIAL EDITION by IL VOLO added to cart. 12 available in stock 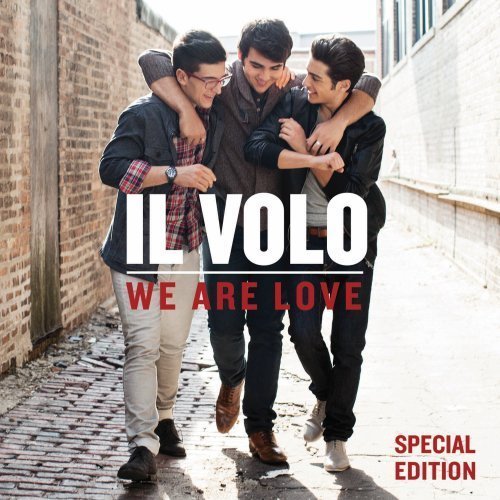 WE ARE LOVE - SPECIAL EDITION
by IL VOLO

Deluxe edition includes five bonus holiday tracks. 2012 release from the trio of Italian operatic pop teenage tenors. The album was produced by Humberto Gatica and Tony Renis, Il Volo's first album debuted at #10 on the Billboard 200 and at #1 on the Classical Albums, selling 23,000 copies in its first week. The album is also entered in the Top 10 in other countries, such as Belgium. France, and the Netherlands and top in Austria.

5. Can You Feel the Love Tonight

Canzone, brings an excitable, youthful bravado to the 12-track We Are Love's more pop-oriented offerings like Warren's newly written "I Bring You to My Senses," U2's "Beautiful Day," and the Mark Portmann-penned title cut, the latter two of which are the only songs sung in English. The more traditional, operatic/classically minded pieces, while seamless, soaring, and impossibly pretty in all the right places, lack the gravitas to truly make the listener swoon, a notion that's lent further weight when the great Placido Domingo steps in halfway through "Il Canto" and effectively steals the show.
~ James Christopher Monger